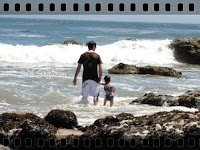 We tried a new beach a couple of weeks ago when it was smoking hot. It was almost like a little cove and very popular. We took the suggestion of a hip young man that worked at Hawg's Seafood, one of our favorite seafood restaurants. We should have noticed who we were asking...

The little cove had a lot of personality. Right next to where we sat, there was a wonderful nature created stream and a waterfall that was almost directly straight-up from us at the very top. We enjoyed having all the different water sounds around us. The waves at this little cove were strong and very persistent. They were determined to chase everyone out by the afternoon. We kept having to pull-up in order to protect our stuff from getting wet. After an hour or so, we noticed everyone had lined-up against the cove walls. If you have been to the beach with your family, you know, once you've hauled all your stuff, umbrella, mat, toys, food, towels...you get the picture, you're not picking up and moving unless it's an emergency.

I figured a lot of people might have liked this area because it requires an action-Jackson to be there! Out of the three of us, we had one that is definitely all about action. She kept busy by rock climbing, and chasing after the waves, while her parents were getting plenty of exercises trying to keep dry from the invading waves.

The funny thing about going to Santa Cruz these past few years is that we never end up in the same area twice. Even when we make a point to go back to that one place we loved. We parked at the same place, walked down the same path, but never do we end up at the same exact spot on the beach. But after this trip, we realized its because we're always looking to try something different, and because we asked for opinions, so no wonder why we end up in different spots. :-)
I am glad Trinity took us to the beach because we had a fabulous time. 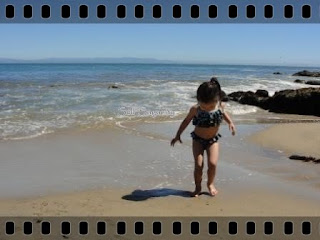