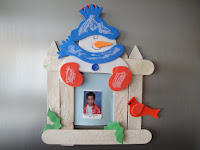 Contrary to what I try not to do- I keep almost everything. I am generally pretty good at letting go of broken toys, but some things here I have tried so many times and still end up hogging it.

I kept some of the boys' toys for Miss Trinity. The hand me down things came in handy, she made use of everything her brothers grew out of. It is amazing how quickly she goes through them because she is so very inquisitive.

All the art projects that my boys made for me when they were little, I kept them all. I have their art projects, and homework, filed by the year. Although we might only look at them once every five to six years, they are safe and secure where I stored them.

The round stuff smiley toy was from my little boy. He was two when I took him and grandma to Pier 39 for the day. They had game booths there that day, and he won it by throwing a ball right into the cup first try. It was luck more than anything, but I was so proud of him. Being that he was only two, I was hoping he possessed some sort of talent, perfect aim? It didn't matter much, I was excited for him. My boy is now more into electronic than he is of his toys. So while he is slowly letting go of the tubs of toys, he sometimes re-visits our keepsake bins and have a good laugh at some of his odds and ends.

As for the glass elephant book end. I bought it because I was taken by the way the color blue looked against the clear glass. Other than that, I have had it for many years just sitting on my book shelf without ever looking at it very much. Then, again, every time I think about letting go, it ends up on the shelf again.
I wonder if I would miss them if they aren't around anymore? 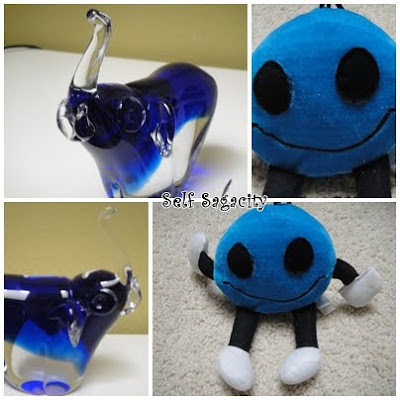 Thanks for stopping by today.